You are here:
Designer

Paolo Cravero born in Savigliano (CN) on 07/09/1975.
He graduated in architecture at the Politecnico di Torino.
From 2002 to 2003 he was responsible for the Centro Europeo di Formazione Artigianato Ligneo, and from 2003 to 2005 for the Centro Europeo di Modellismo Industriale. Around the same time he plays the role of tutor to the Botteghe Scuola project organized by the Regione Piemonte.
Thanks to these experiences approaches the furniture craft and the industrial model sector, in contact with companies of the caliber of Pininfarina, Ital Design, Bertone. It acquires in this way valuable skills which contribute significantly to its formation and allow him to give a professional capacity to his innate passion for design and the creation of furnishing objects.
Since 2011 he has been a member of the Cravero and Bonetto Studio, a company born oat the end of 70s and in constant evolution, attentive to the development of talents and always ready to try new roads.
CONCEPT
Paolo Cravero puts in its projects head and heart.
He looks to tradition, still reads it, breaks it down and reassembled it to create new forms, in which the geometric rigor is combined with the game lightly.
His design objects, behind the simplicity of the lines are fun and funny creations, which offer many possibilities for customization: dismantled and reassembled with playful spirit.
They are unique objects, clear and ironic at the same time. 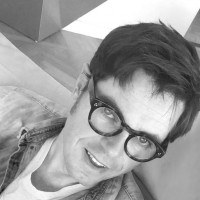